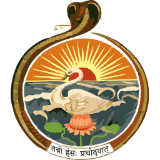 Sri Ramakrishna Math, Nattarampalli, Vellore District is one of the old centers of the Ramakrishna Order. Since its actual inception in 1908, this rural monastery has been rendering its humble services to the villages in and around of this locality.
The Math has been sanctified by the stay of Swami Shivananda (once in 1924 and again in 1926), Swami Ramakrishnananda (in 1926) and Swami Abhedananda (in 1906), direct disciples of Sri Ramakrishna.

“When religion declines and irreligion prevails, I incarnate myself in every age to re-establish religion” – Bhagawat Gita

Truly the Math had its genesis on Tuesday, 12th January 1886, Makara Sankaranthi day – when elder Gopal (later Swami Advaitananda) gave rosaries and ocher clothes to Sri Ramakrishna who sanctified them with a Mantram. Sri Ramakrishna himself distributed them among his young disciples who in turn wore the ocher clothes and saluted him. Pleased immensely by their monastic attire, Sri Ramakrishna blessed them. The Order thus founded by him, however came into official existence after His Mahasamadhi.

to bring into existence a band of monks devoted to leading a life of purity, renunciation and practical spirituality under inspiration of the life of Sri Ramakrishna, from among whom, teachers and workers could be trained and sent out to serve the world in all possible ways (Belur Math Trust, 1889)

To anyone desiring to embrace monastic life represented by ‘The Royal Saffron’, Ramakrishna Math offers excellent avenues suiting the modern age, keeping at the same time the ancient values intact. Again, like the seekers of the past, the monks of the Order radiate peace and spread Divine Knowledge, thereby sustaining the society.

If indeed God had created this world, why should there be so much misery and so much suffering?

This question has been defying the intellect of even learned men down the centuries. The entire creation is just a Divine play – leela – so say the elders. One reaps as one sows is the rule of the game. Sufferings are therefore the result of one’s bad actions just as one is rewarded for good actions or actions of virtue. The suffering person needs succor. On the other hand, there are persons aspiring to know the Truth underlying Creation. It is exactly here that the welfare of the world is reconciled with the spiritual need of the aspirants.

Solar systems are made up of solar panels (modules), a mounting system, and a solar inverter with  controller. Solar panels produce DC electricity from sunlight. Then the inverter converts the generated electricity into AC, so that it can be used in our Math.